So before I continue my writing I want to inform you that this is going to be a way shorter post than I planed. I was already finished with the blog and just wanted to upload some more pictures but when I opened it and my whole writing was gone! That was really frustrating and now I’m not that much in the mood to write it all again but I’ll try.

I drove from kampot to the border with the German guy from the hostel because he had to make a visa run. At the border everything went perfectly smooth and I took a very cheap taxi motorcycle to Ha Tien. From here I caught the last ferry to the island Phu Quoc. This island is pretty big, it even has its own airport. My hostel was located in a small fisher village on the east coast. Sadly there were no beaches here but I rented a scooter and was able to see some nice places. So the area where I lived was very quiet and during the day was a street market beside the road. I also spoiled myself a little here because I rented my own room. It felt like pure luxury to have my own bathroom, a big bed and just some privacy! I enjoyed the stay in this guesthouse a lot. 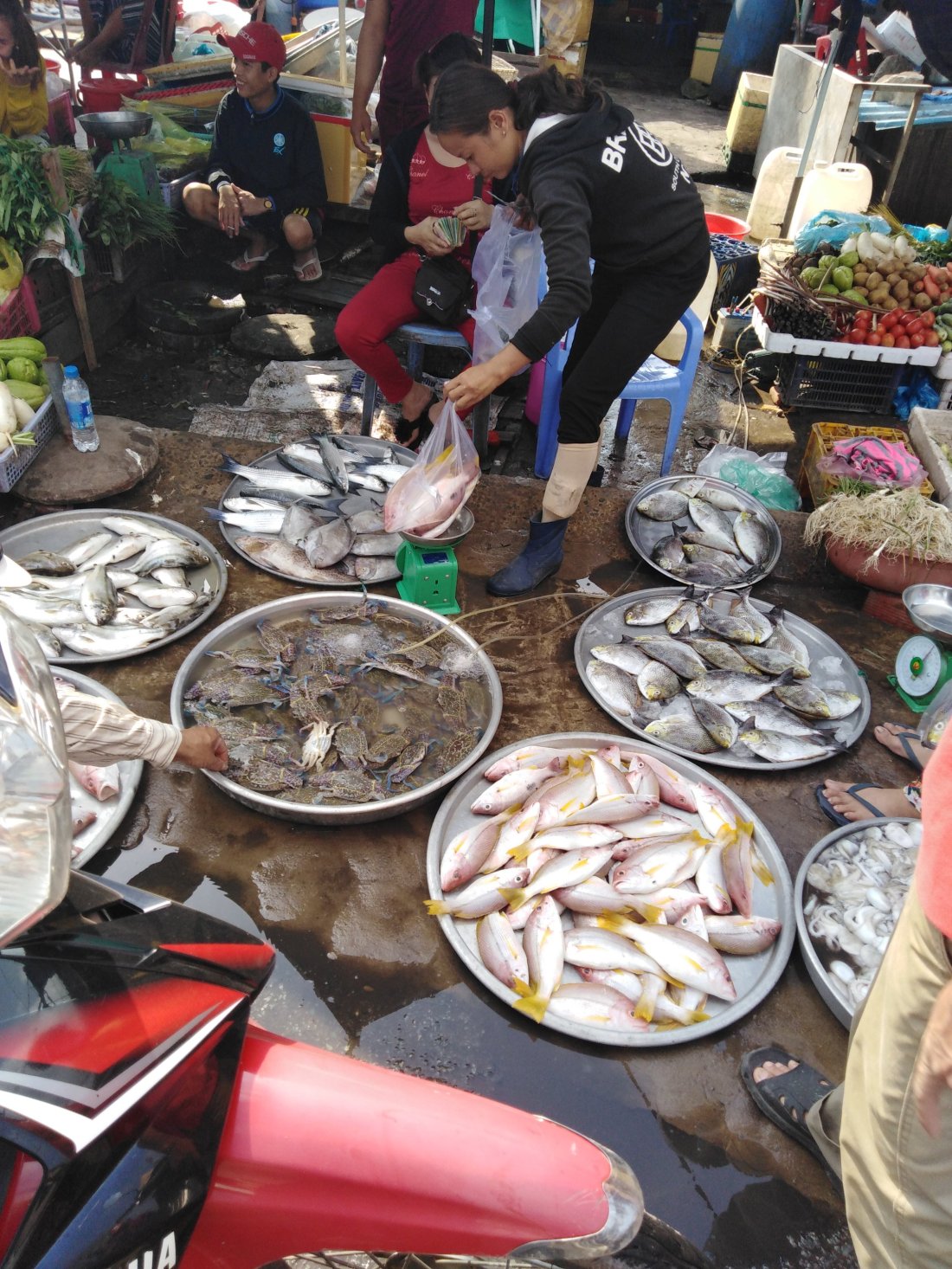 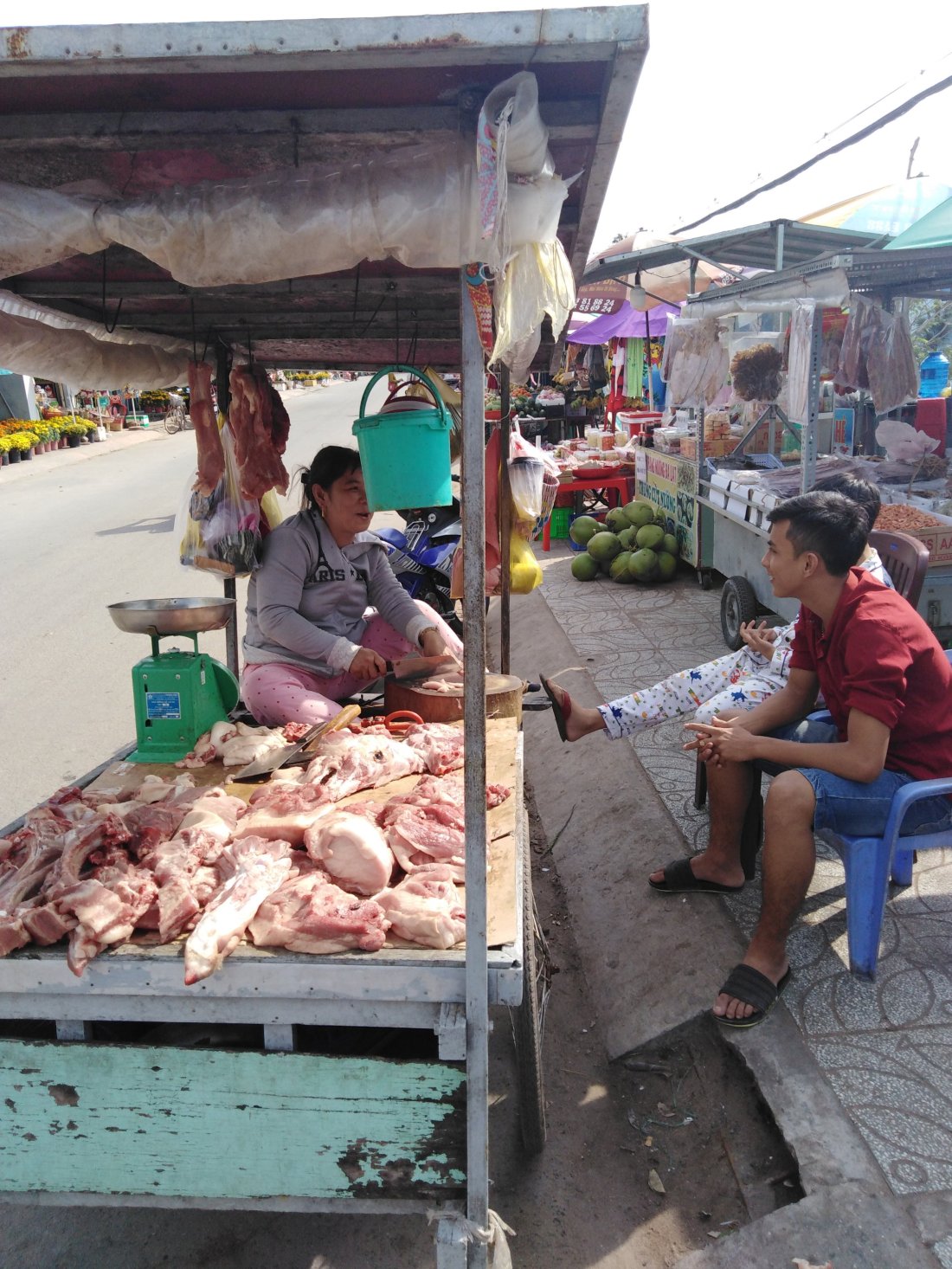 On my first day I drove to a little park with a small trail to a waterfall. The park was very nice with lots of different trees and flowers. At the end of it was a small river and I walked along it until I arrived to this beautiful small waterfall. I really enjoy these little hikes very much. 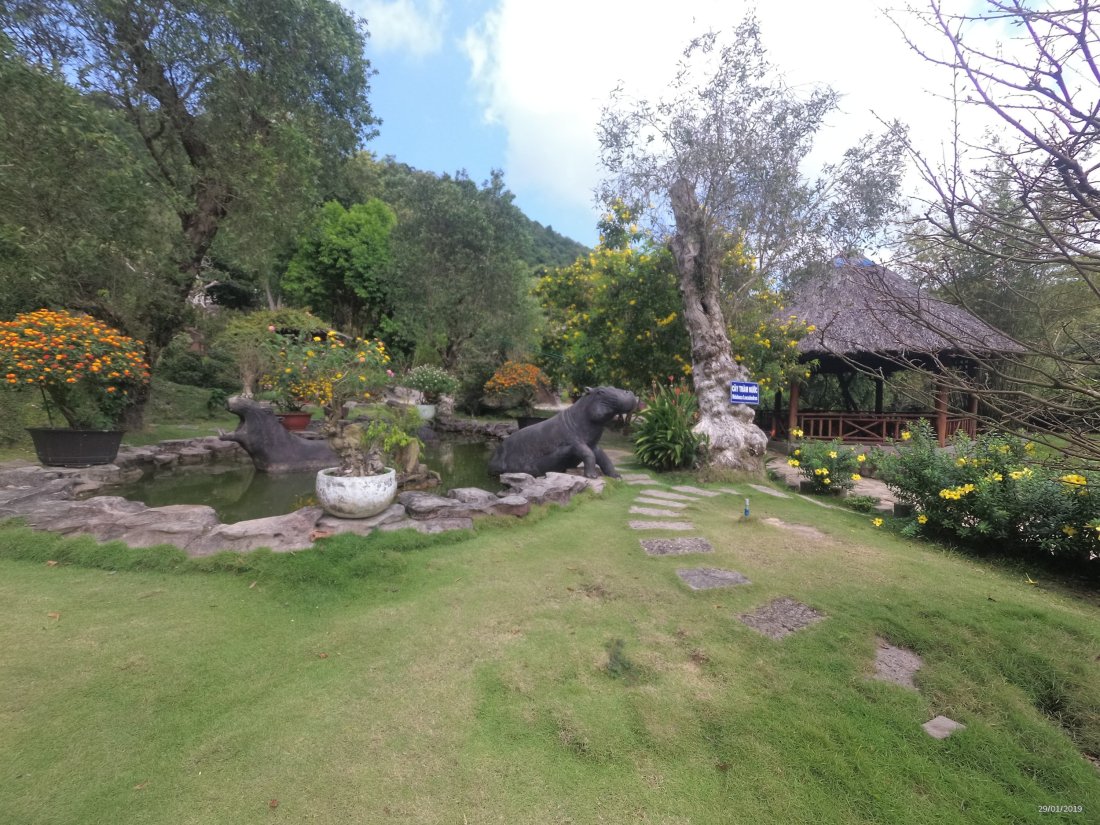 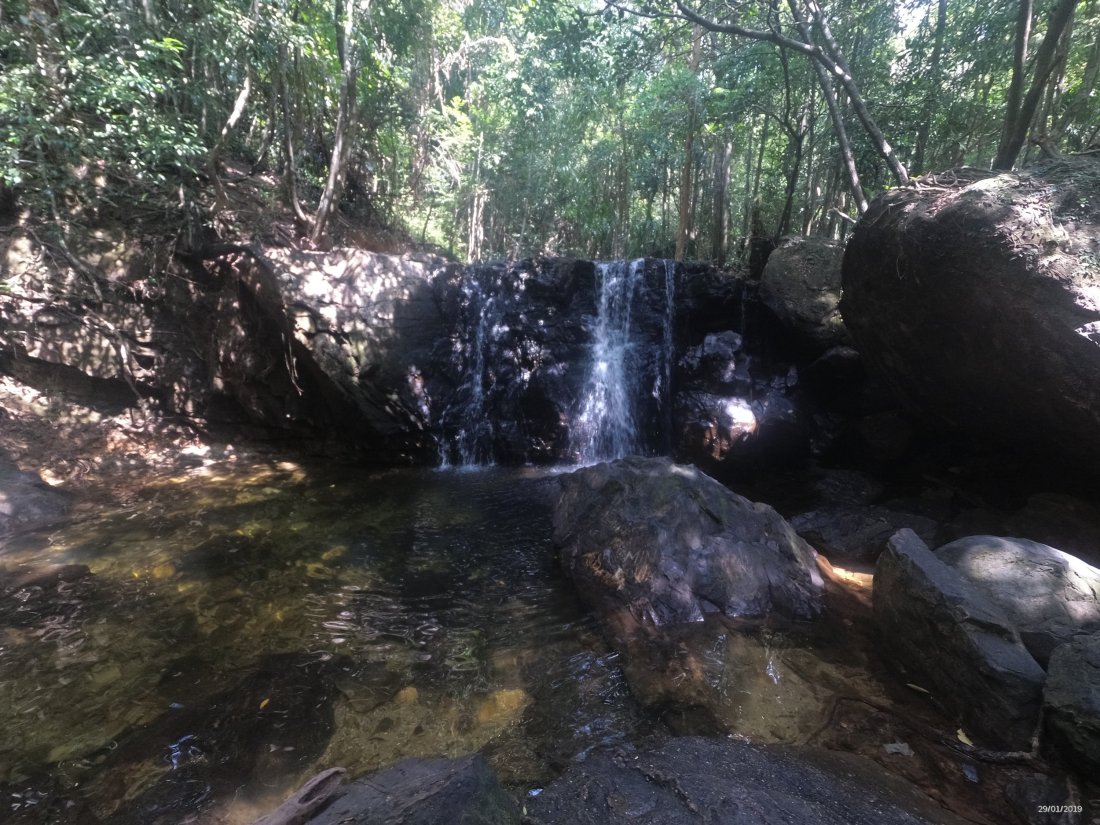 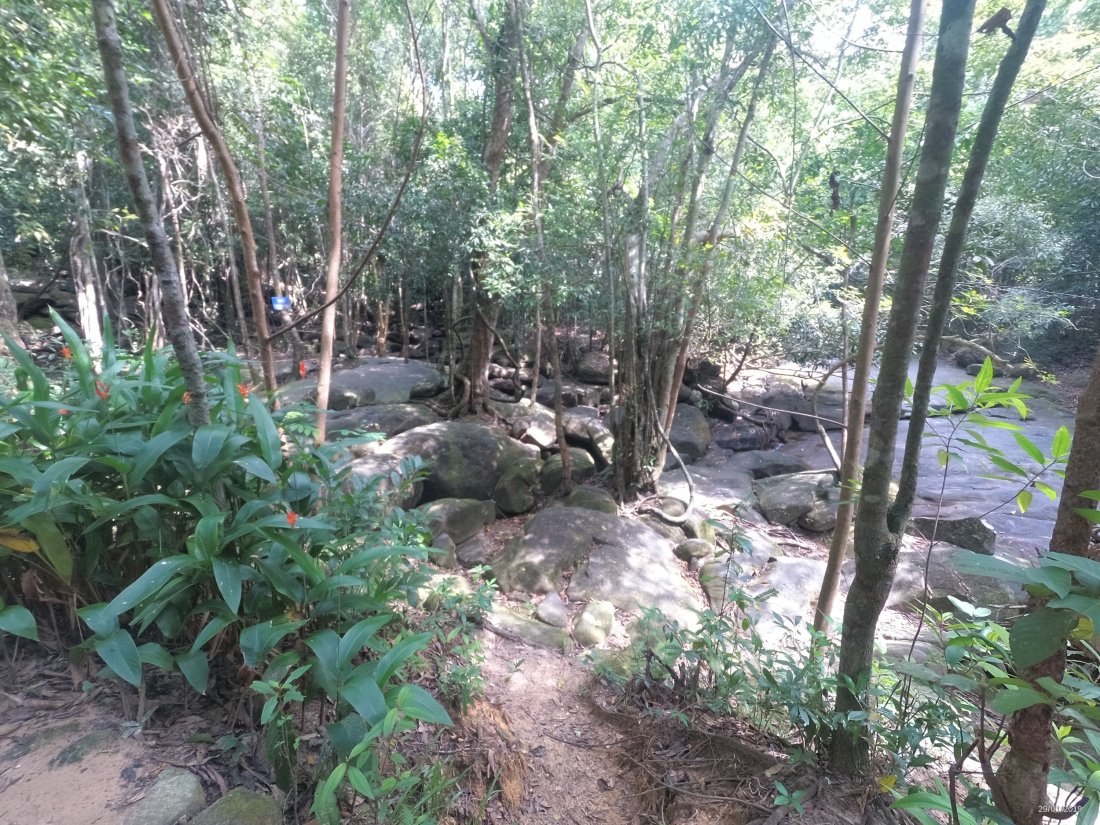 After this very pleasant hike I drove to the beach coast on the west side. Most of the beaches here belong to hotels or resorts but I could still find a nice place. The water here is not that clear and cooler than in Cambodia. I still enjoyed the sun and later went to a small restaurant for dinner. Here in Vietnam people eat a lot of meat so sometimes it can be a bit hard to find something as a vegetarian.

On my second day I met an Italian guy and we went down to see the south of the island. We first drove to a big temple which is also the only temple on the island. It is a beautiful place to visit and I could really see the Chinese buddhist influence, for example the big painted vases or the fat laughing Buddha statue. Also the architecture is a lot different and reminds of a pagoda. It’s located at the coast so the view from the temple is amazing. Sadly the beach there is full of garbage… 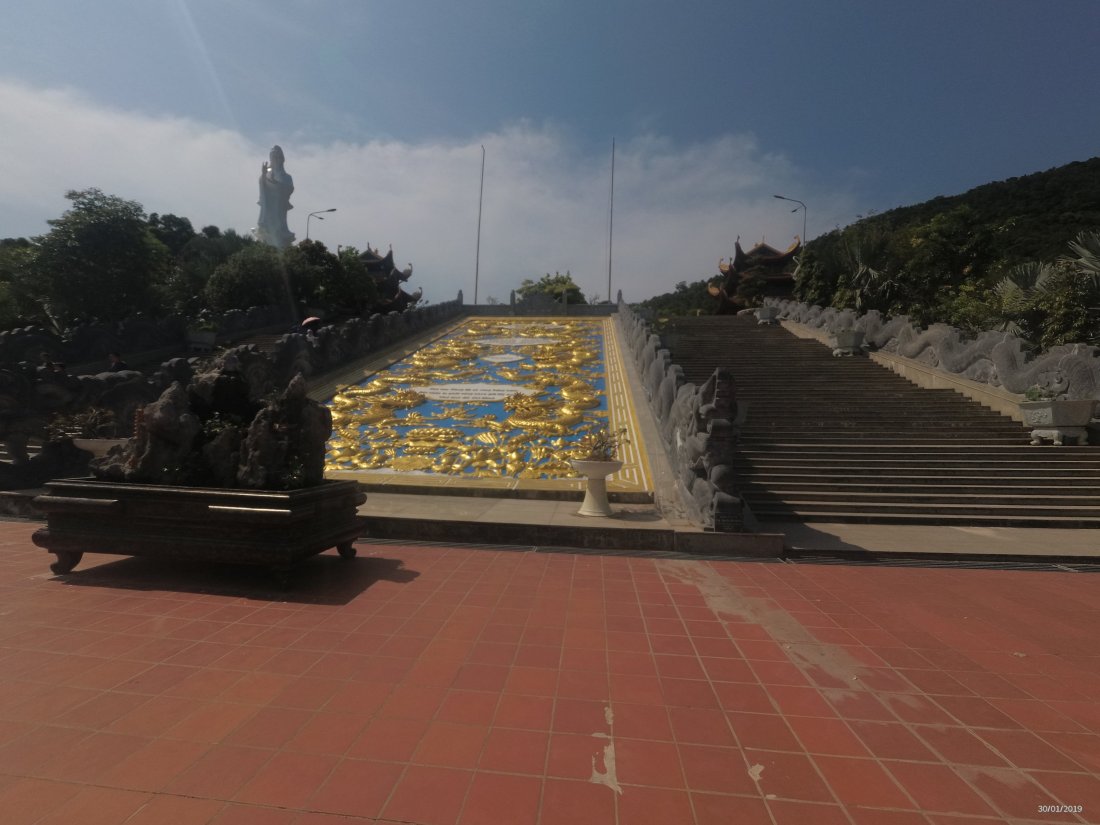 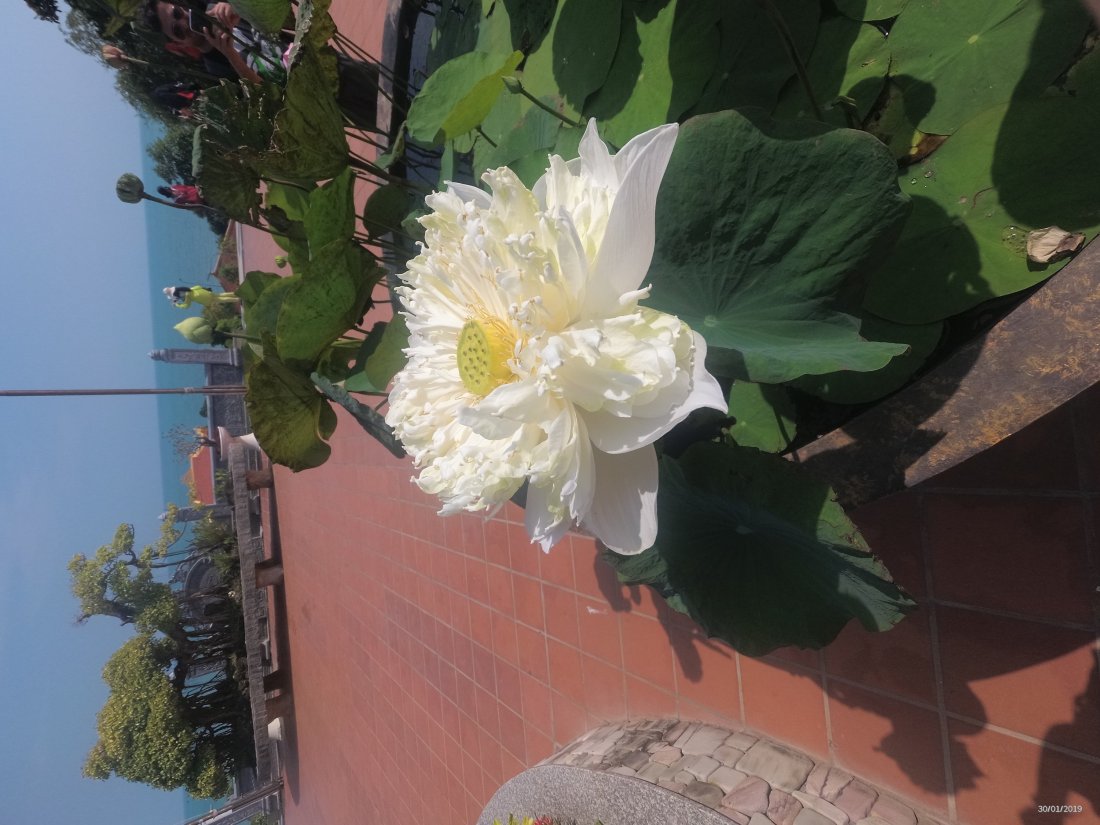 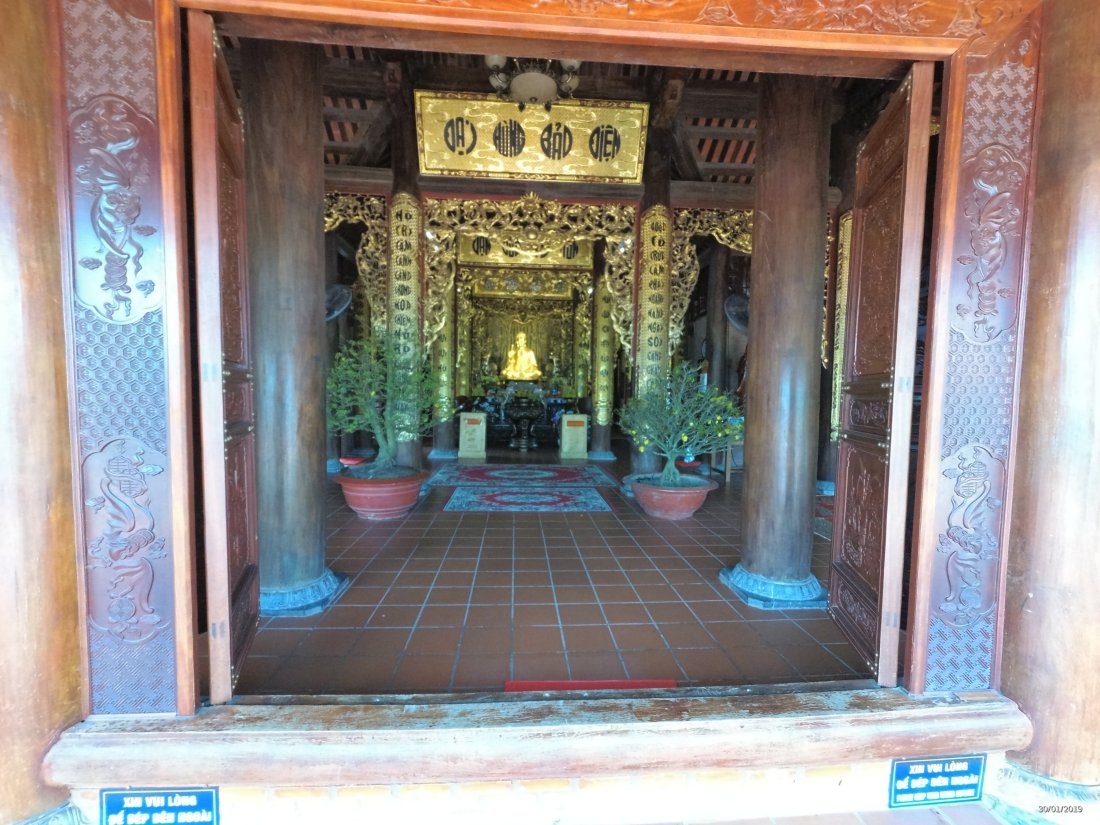 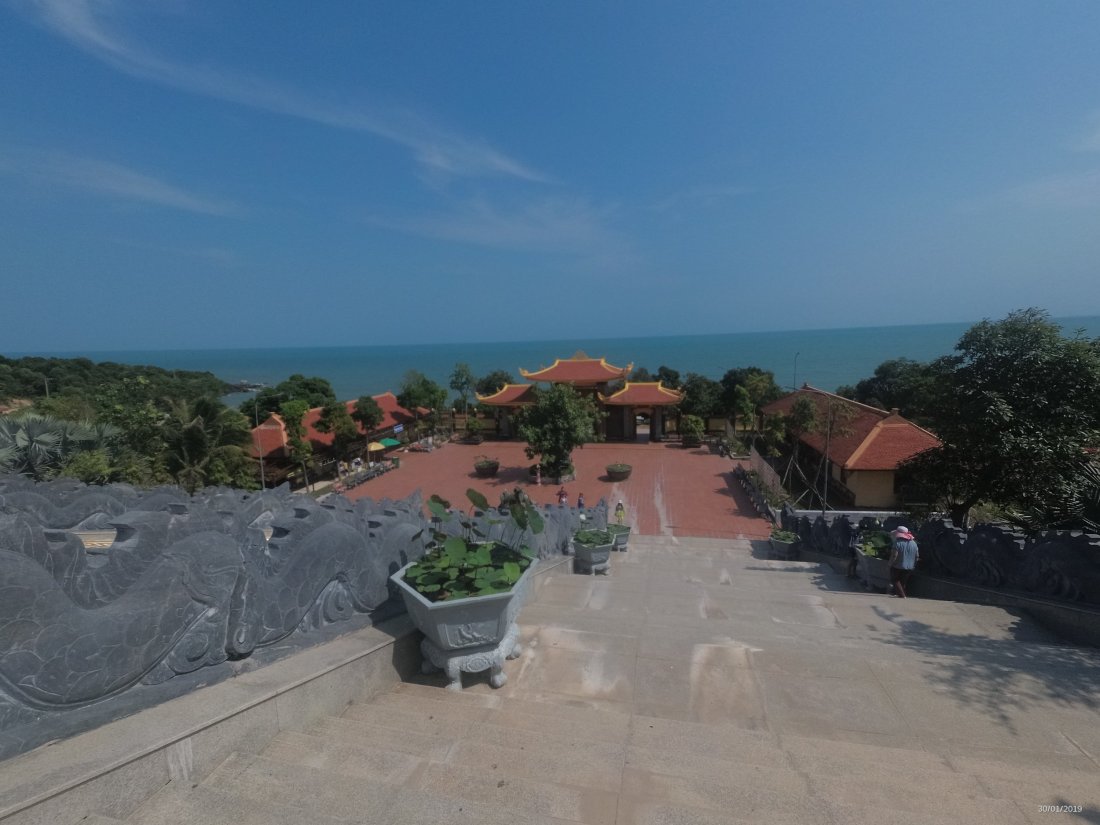 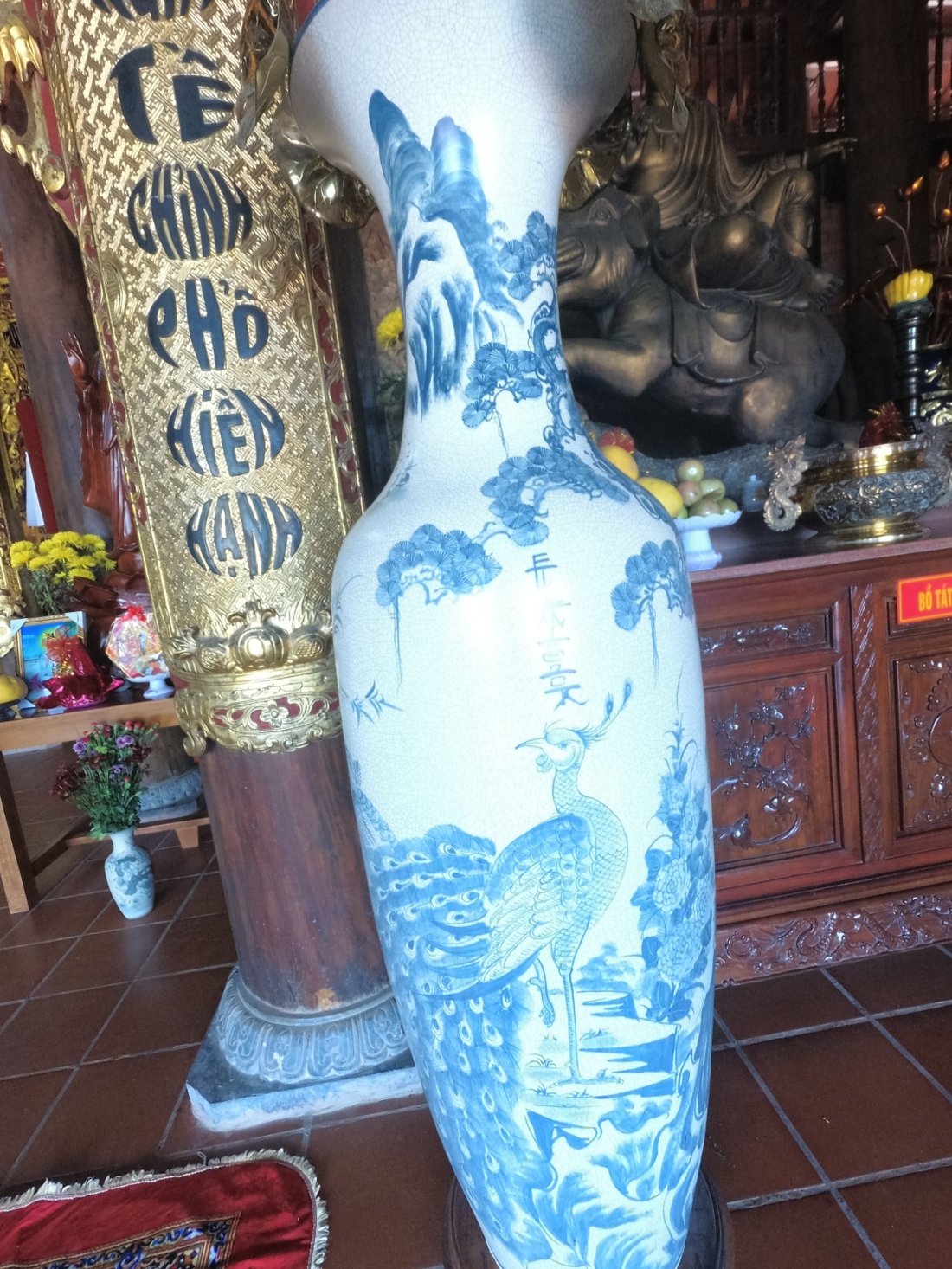 From there we drove further south to a beach which my hostel host recommended me. The beach was not that big and very crowded, mostly Chinese. There is a couple of restaurants and cafés there but as soon as one goes away from that beachfront there is a lot of garbage. We still enjoyed the sun and layed in a hammock for the rest of the afternoon. Before we left we collected some garbage from the beach in a plastic bag I carried with me. It’s not much but at least something and I’ve seen quite a few tourists (mostly western tourists) do it as well. Since I traveled here in Asia I’ve become a lot more aware of the pollution of our planet. I think here people don’t really know the consequences of all the garbage, especially the plastic pollution. They are so used to just throwing things on the street or wherever and of course a lot of garbage comes from the sea as well. With the globalization and consumption everything here developed very fast and you get everything in plastic cups, bags and containers. It’s really upsetting me how we treat the earth and while in the west you don’t see it as clear as here because it’s been ‚taken care of‘, our waste is probably double of theirs. So yeah it’s really come to my attention to do something about it and find alternatives and solutions for plastic and deforestation. But in the end everyone needs to start by oneself so I’m eager to change my bad habits and reduce my footprint.

In the evening I had a great dinner at my hostel and enjoyed my last night chatting with some other people from there.

My next destination was Can Tho, a city in the Mekong Delta. I arrived at night and I expected to come to a small village but this is actually a quiet modern city. Because of the Vietnamese holiday called Tet, the Lunar New Year, the whole city was decorated with lights and during the day I saw flower sales everywhere.

The next morning when I woke up I wanted to get some proper western breakfast because I wasn’t up for soup. After walking for an hour through the city I stopped looking for food and just started to explore the city. One can really see the French influence in the architecture of the houses and the whole city layout. I enjoyed walking around and it made me especially happy to see all the flowers at every corner. There is not many tourists here but because of the holidays there were a lot of Asian people on the street. At around noon I finally sat down to get a vegetarian soup which was delicious! I than walked a little bit more around and even arrived at a university from which I first thought it was a park. There was almost no one there but the property was huge and full of little gardens because it’s a university for agricultural and biological development research. After walking around for like 5 hours I wNt back to the hostel to relax a little. 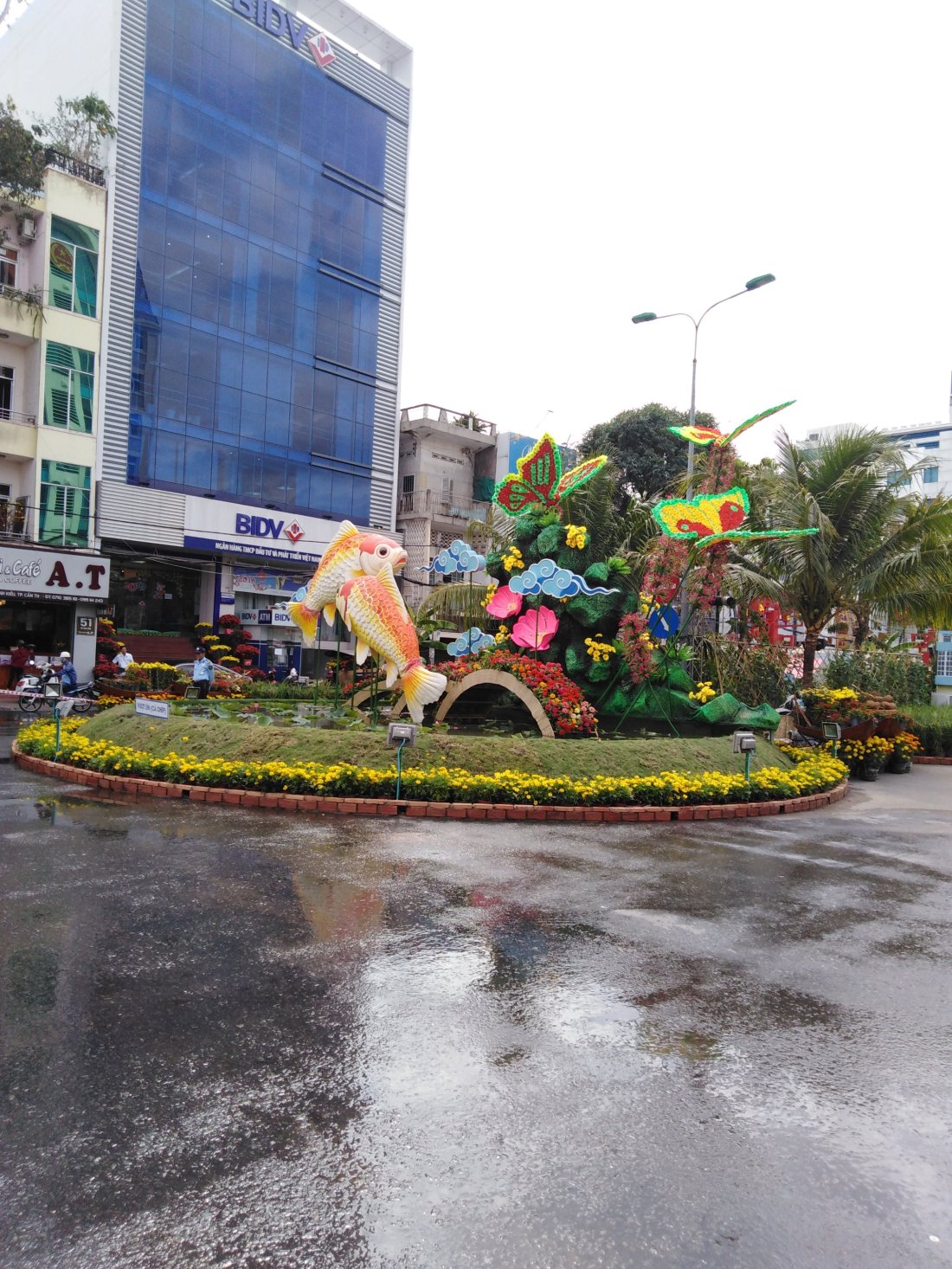 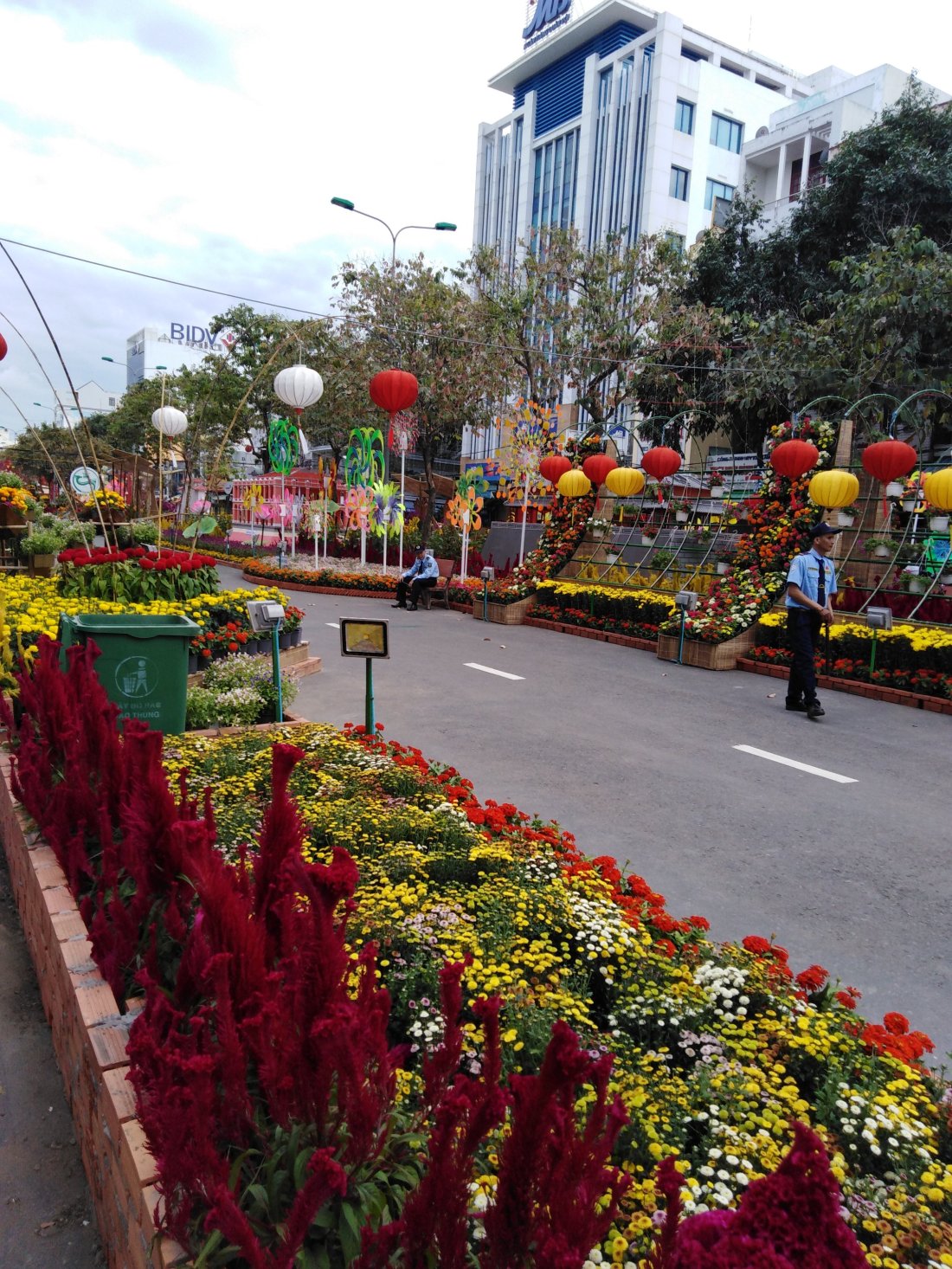 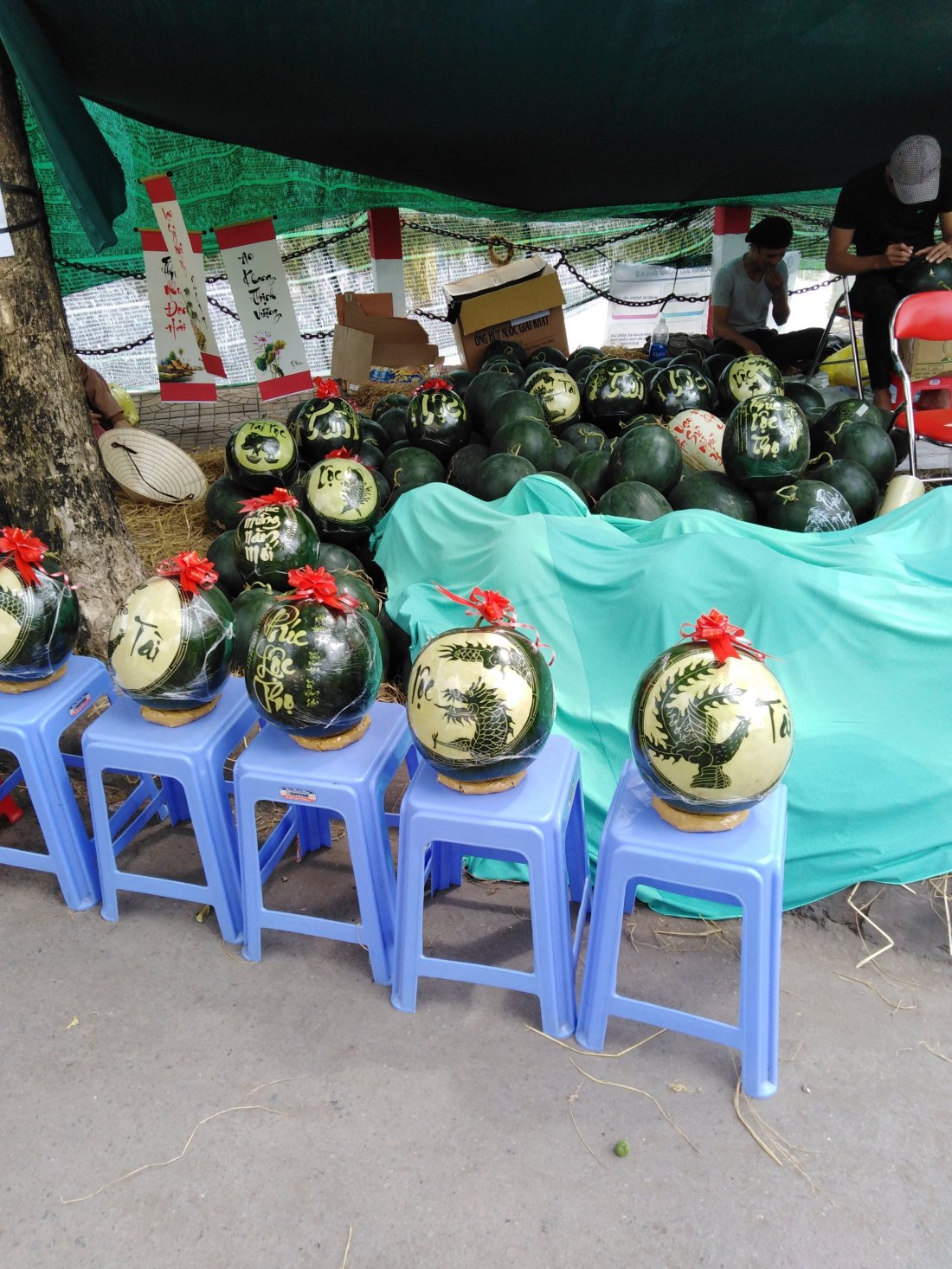 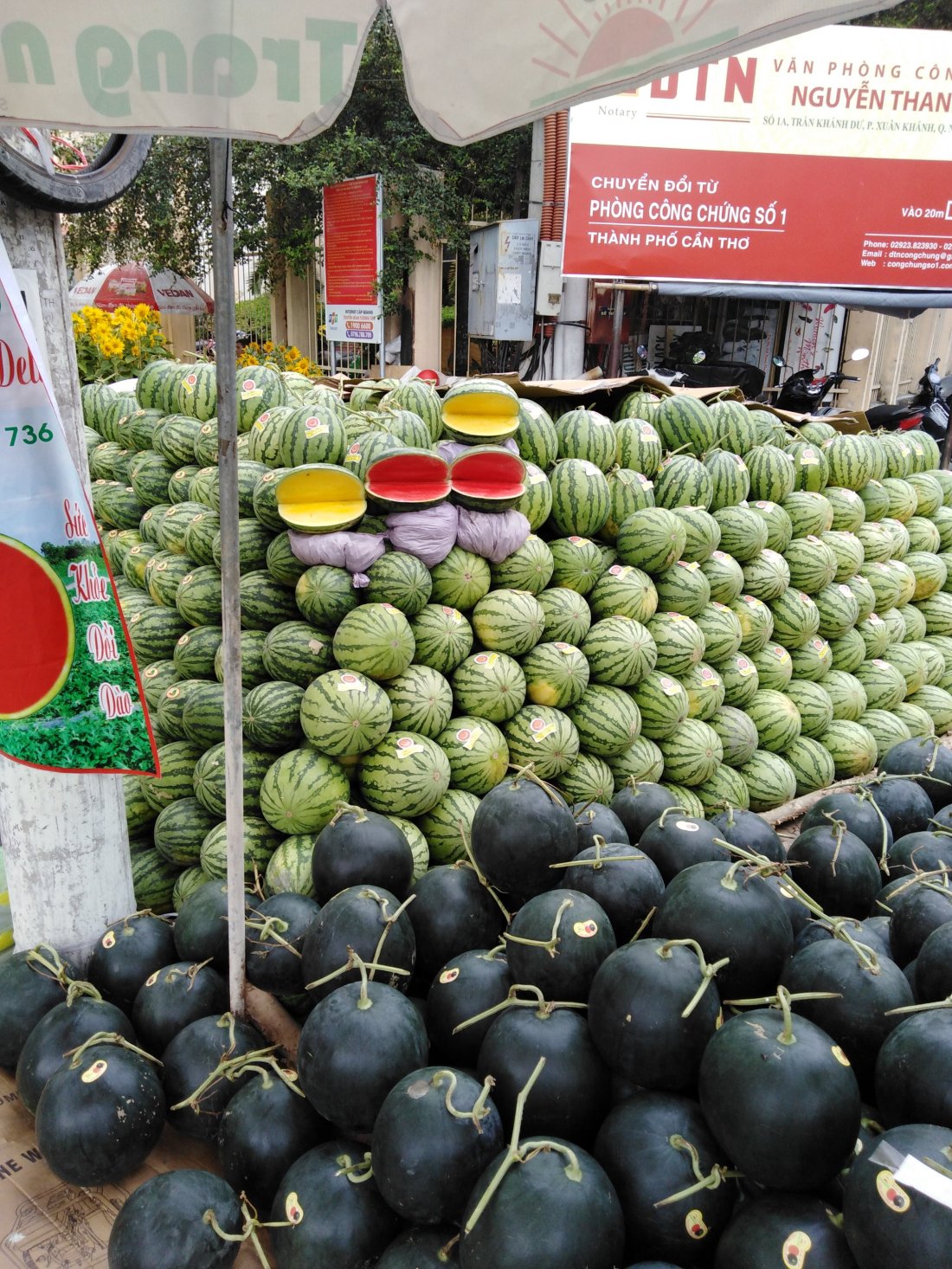 In the hostel I then met two people from France with whom I later went out for dinner.

I only stayed here two nights and since the floating market is the main attraction there I decided to get up really early and join my two French friends for the tour. We went on a small boat at 7am and drove for like 20 min on the Mekong. When we arrived there were some boats with fruit or vegetables and even food or drinks driving around. It wasn’t a real market though and I think it is mostly a tourist attraction and not the actual place where the locals buy their food. But still it was a lot of fun to see and experience it.

Ho Chi Minh City
After this pleasent trip I took the bus to Ho Chi Minh, also known as Saigon. This is the biggest city in the south and it really is very modern. The city is named after the great communist leader who encouraged the people in his country to finally become independent and built a democratic Republic. My hostel was pretty much in the center and there was a vegan Vietnamese restaurant right next to it so I had a delicious dinner.

The next morning I stood up quite early, did some yoga and then went out to walk around the city. I first visited the post office because I had to send some postcards back home. Directly in front of it was the Saigon Notre Dam. Both buildings are remainings of the French colonial time. I have to say it is so weird to see catholic churches in Vietnam. Especially in the south there are a lot of them although they look a bit different and mostly have exaggerated decorations.

From here I walked to a little water fauntain and had some lunch. Then I walked to the independence palace, mainly because it was the only place here with a park. It’s a very modern building and the interior is reconstructed like it was in the 50s to 90s. One can see the political meeting halls, everywhere very fancy furniture and noble colors, the presidential chambers and the bunker where all the war plans and comunication machines are. I found it very interesting and nice to see, especially the bunker with these big war maps and old communication centers. Outside is a little park and also some war cars or war air force to look at. I’m very happy I went inside and was able to see and learn about the political history of this place. 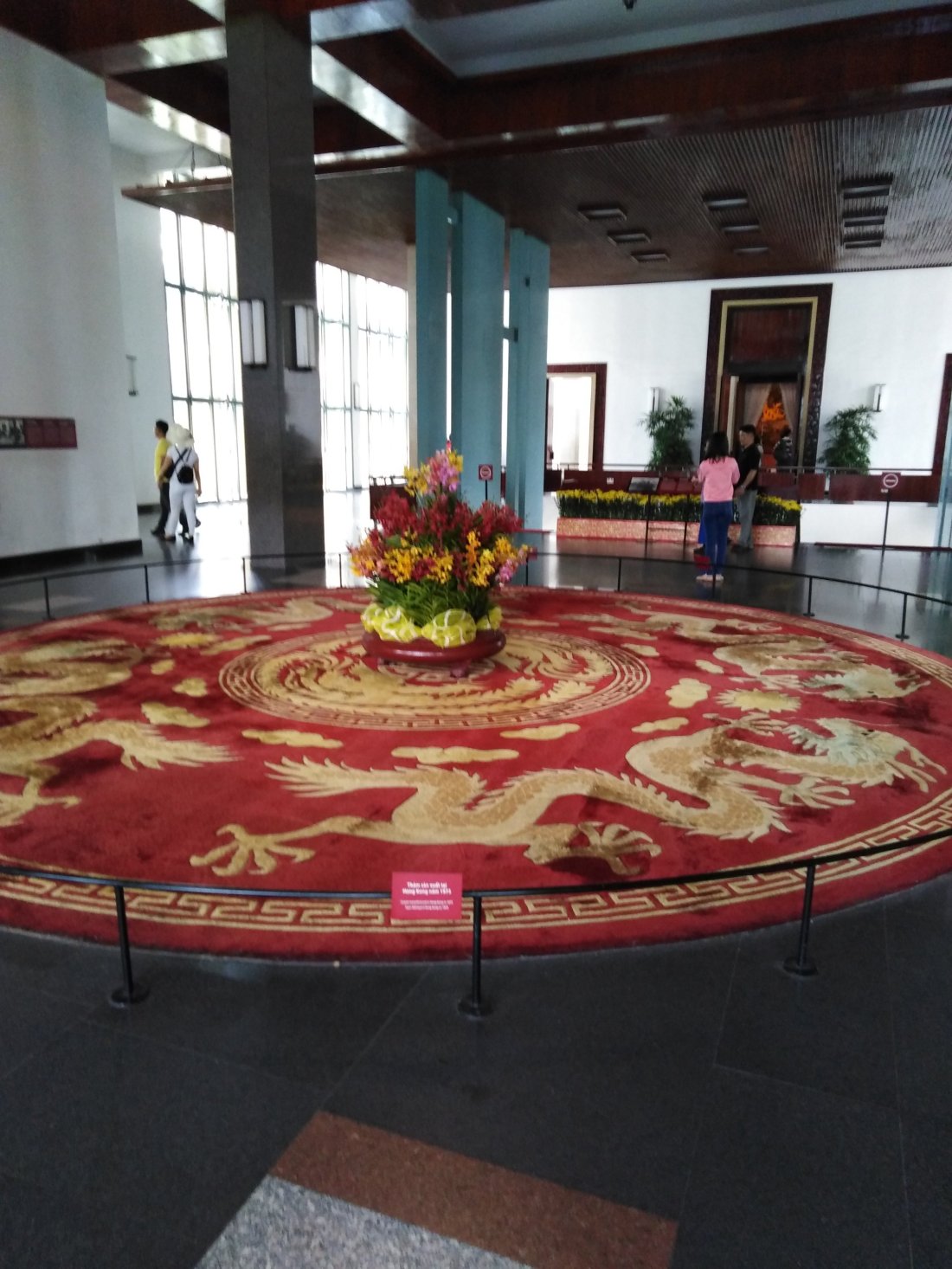 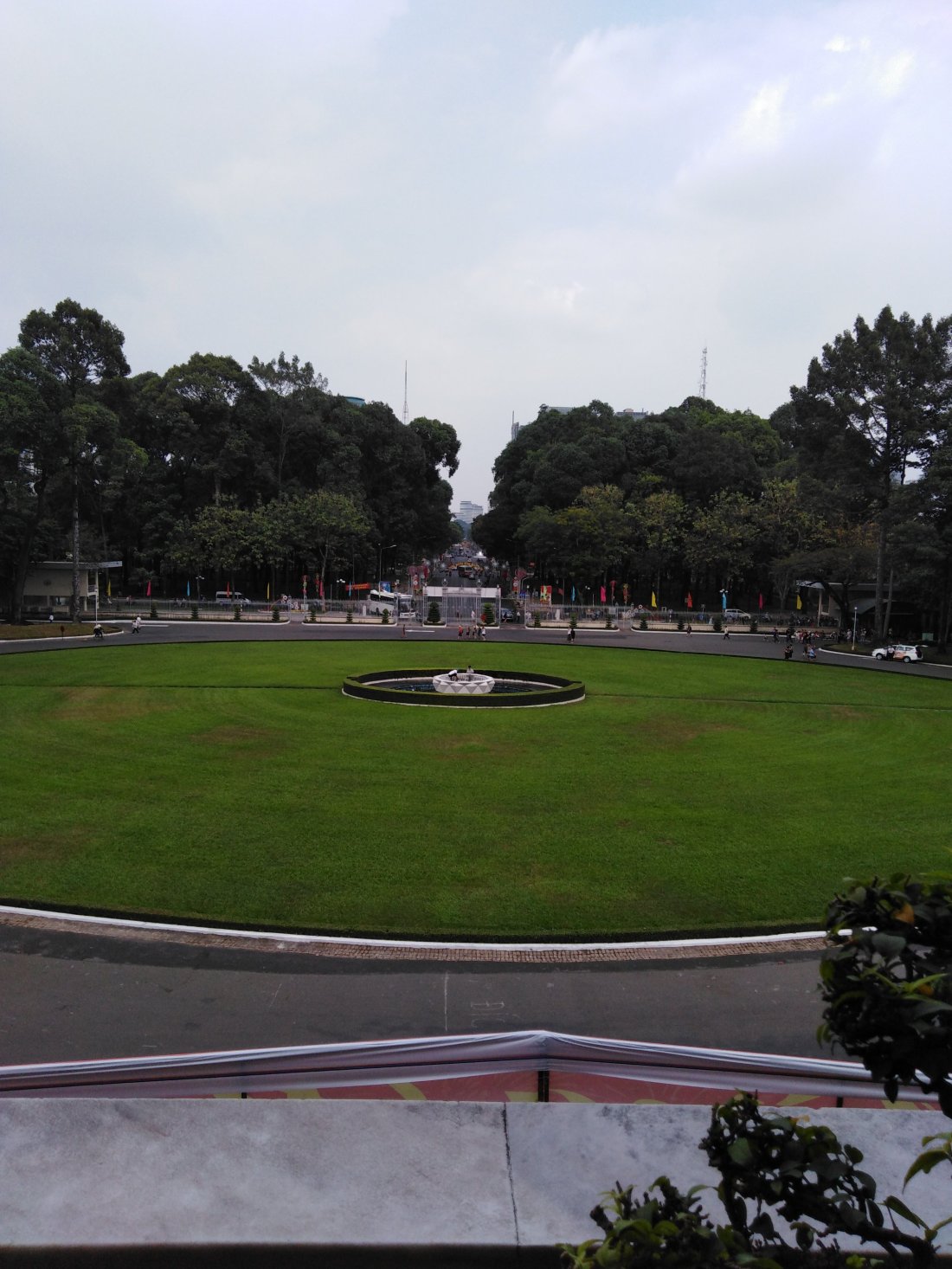 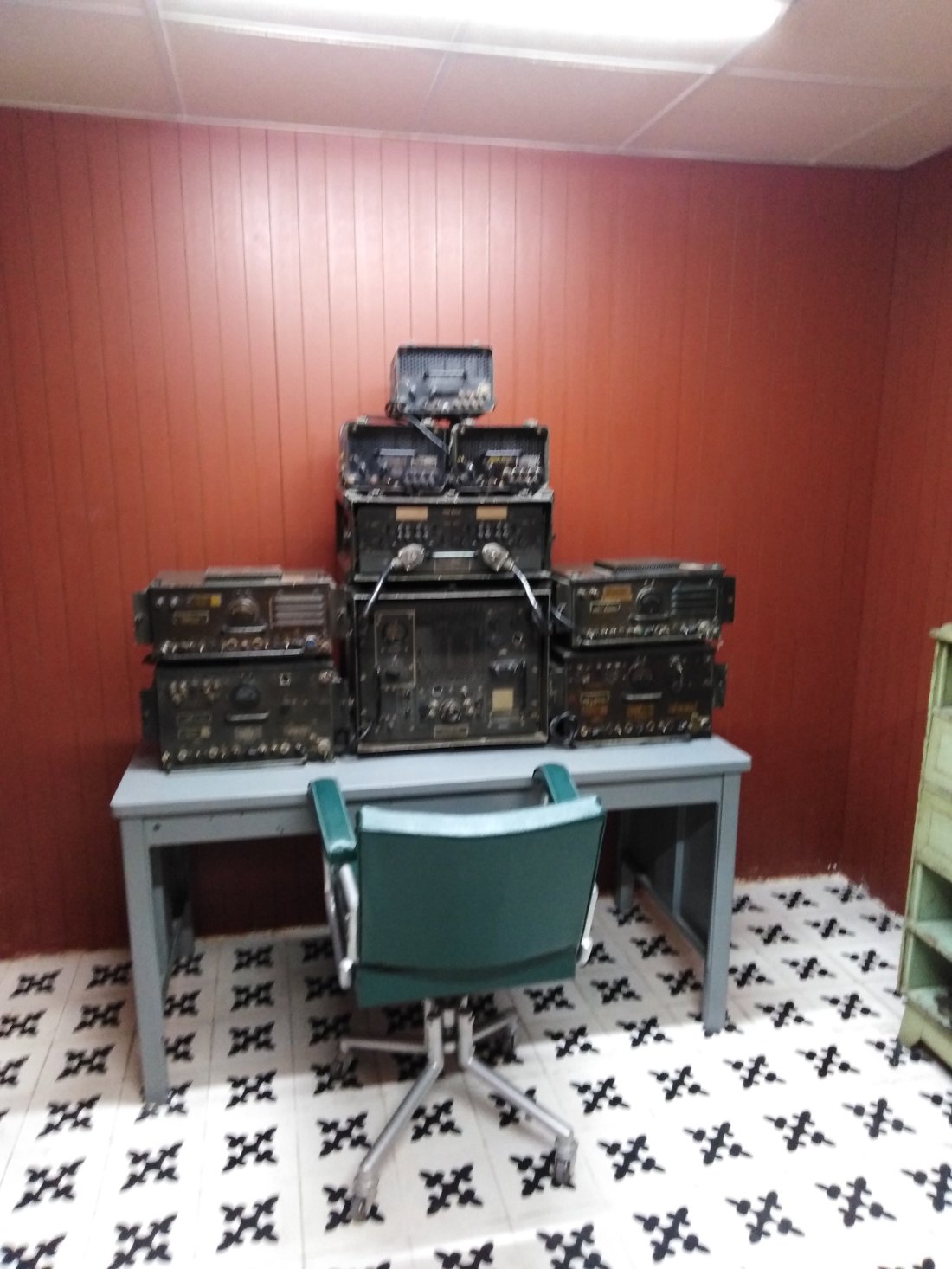 After this enlightening visit I had to go back to the hostel because some school friends from Germany just arrived. I was very excited to see them and spent my time in Saigon with them but at the same time it was weird to meet them here in Asia. They were pretty exhausted from their travel so we only went out for dinner. My friend from Spain, Andreu, whom I met in Thailand and Cambodia before, was in Saigon for one night so he joined us as well.

When we went out the next day almost everything was closed and places that were open were more expensive than usual because from the 4th to the 6th almost no one works. But it was nice because now we could experience new years eve in Vietnam. So that night we went in a rooftop bar hoping to see the fireworks but our view was to the wrong side so we only saw a bit of it and on a TV was a live stream. After it was done we went to the boulevard in hope to see some kind of party or celebration but when we arrived there was just some people taking pictures from the light and flower decorations or eating some street food. I enjoyed the light decoration a lot but we were all a bit surprised of how calm their new years celebration is compared to Europe. Someone told us it is more a family holiday and a lot of people from the city went back to the country side to their families. It was a nice experience but traveling while Tet holidays is more annoying than pleasant. Everything is more expensive and a lot of things are shut or don’t work properly for almost a month. But at that time I had no clue about that,these things I only experienced while traveling further up north. 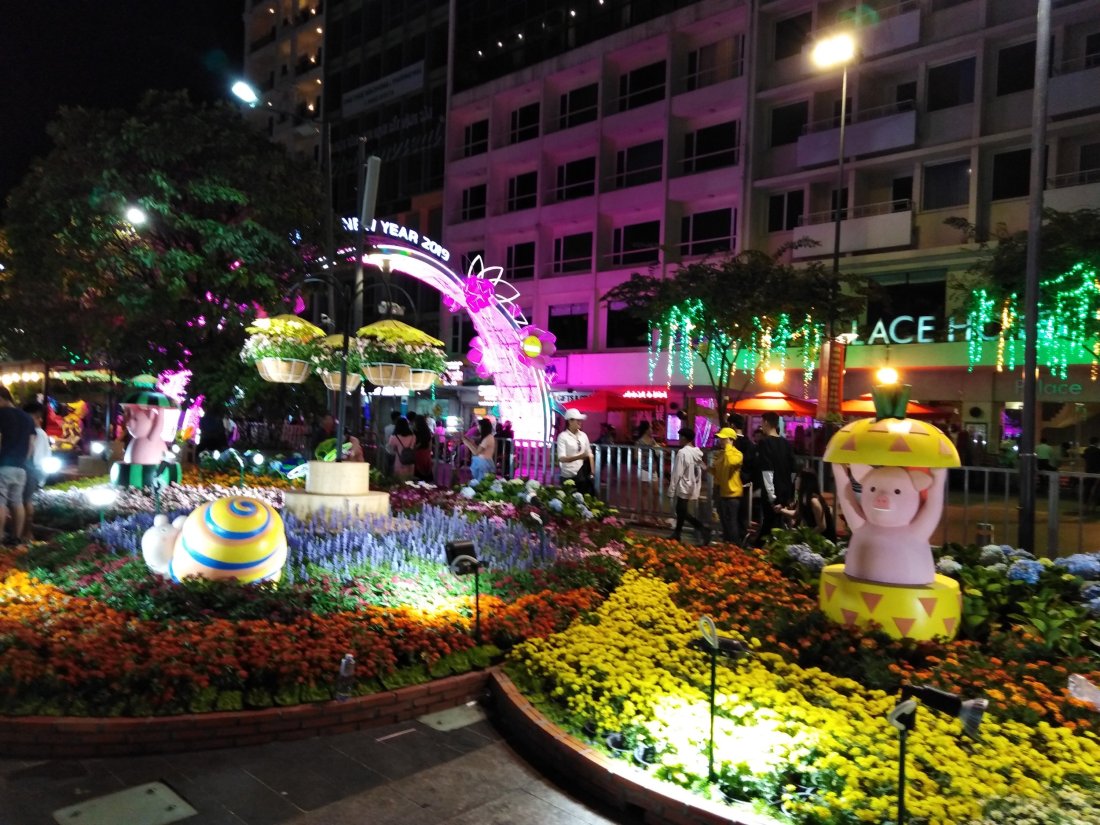 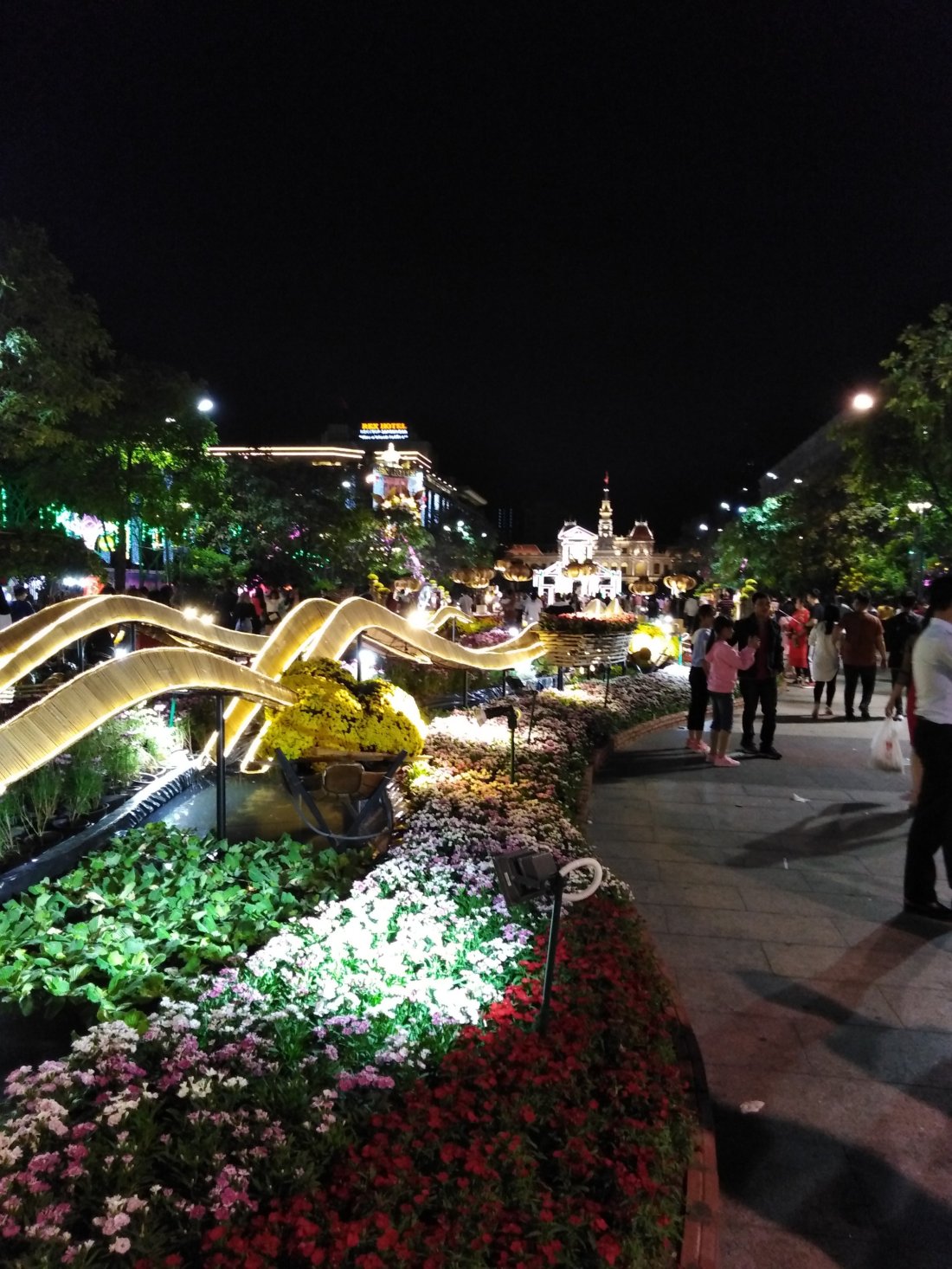 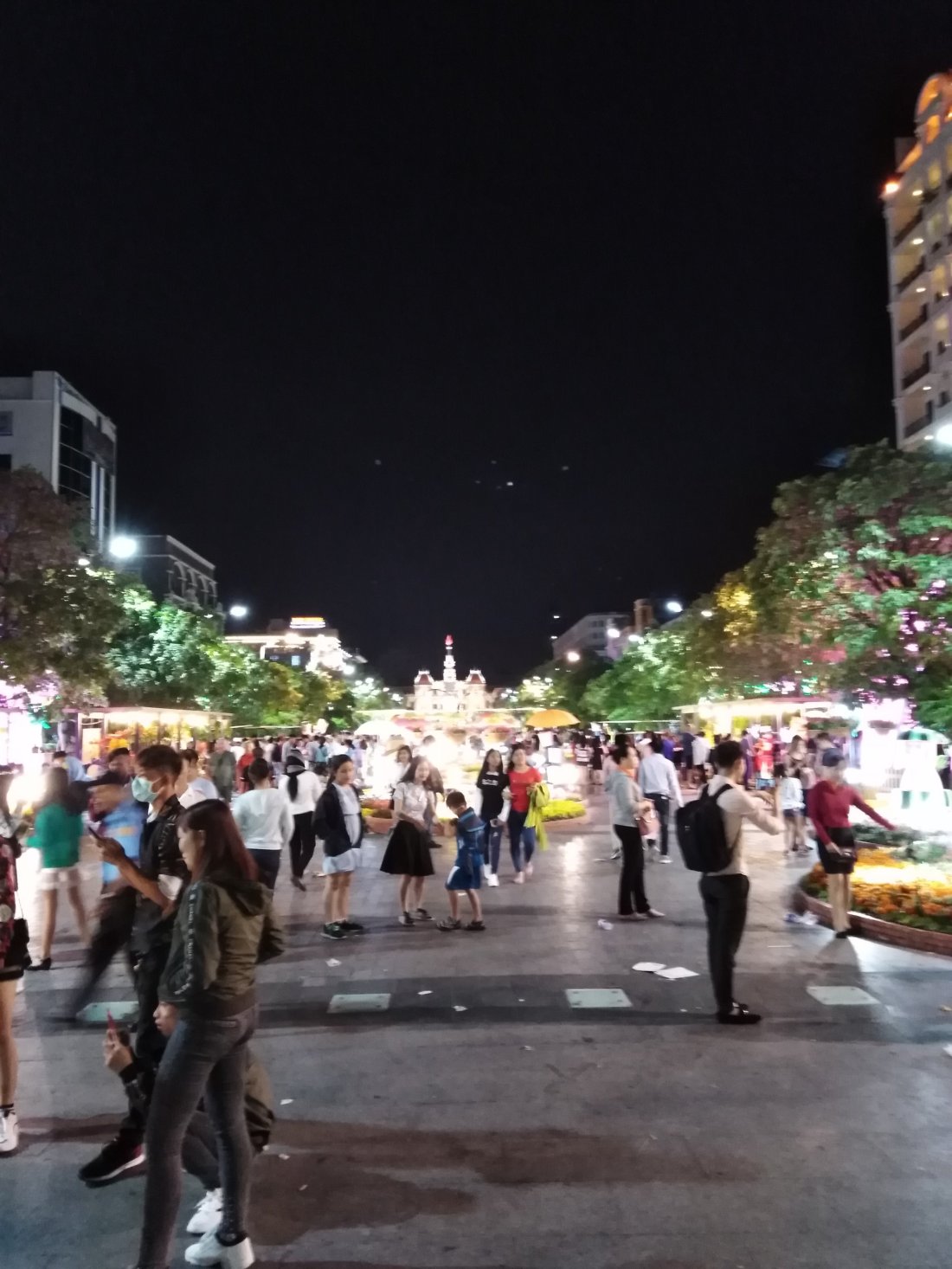 Finding a bus the next day to travel ahead was a bit difficult as well. My next destination was Mui Ne and I eventually found one but the others didn’t and ended up booking a flight because nothing else was available.

My bus to Mui Ne was a very comfortable sleeper bus so I had a very pleasant journey to the coast. 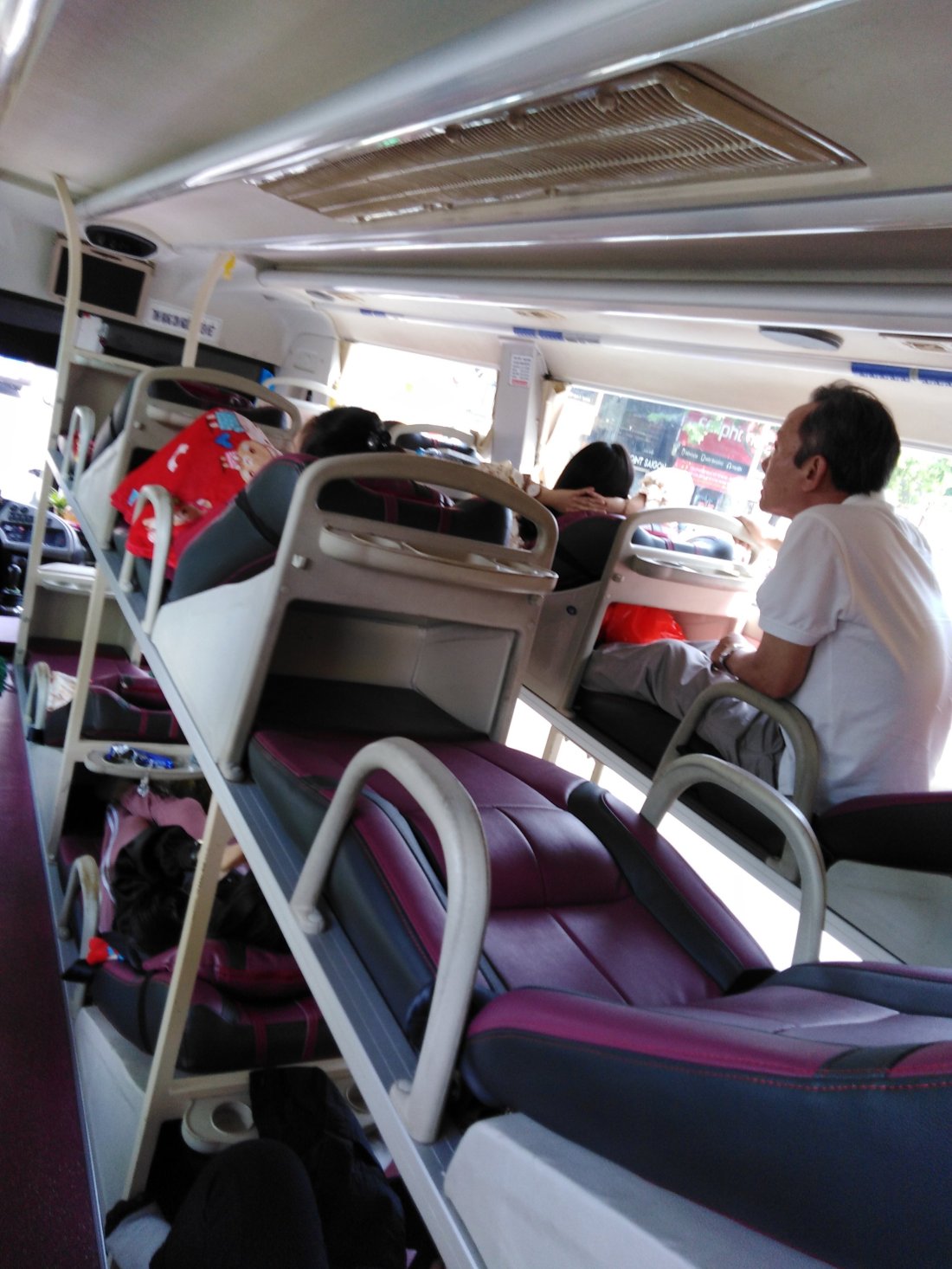 My first impression of this country is very positive. It is quite modern and I love the architecture here a lot. The people are mostly very nice and want to talk to you (especially the children). The food here can be very good but sometimes there is not a weide variety of different dishes especially for vegetarians. And I’m a bit sad that there is not many places that have fruit shakes or smoothies from fresh fruit like in Thailand or Cambodia. But that’s complaining on a very high level hahah